Skip to content
The most comfortable heritage boot in the world.
Filter

Let customers speak for us

from 745 reviews
No regrets. Still the best.

This is my second pair of Fairfax (I wanted a different colour) and my third pair of Wilcox boots.

The Fairfax is probably my favourite boot I’ve ever owned. The black pair I bought 4 years ago is still going strong, they’ve moulded to the shape of my feet and it’s like walking on clouds, especially considering I have short hamstrings and I’m prone to heel pain.

I will say that I’ve worn them a few times and still breaking them in, probably the longest it’s ever taken me to break in boots even after conditioning. The reinforcement in the heel is quite stiff and it’s just taking longer than expected to soften.

Also, at the risk of ruining some of the style, I don’t think it would be terrible to have some tassels/loops at the rear to help getting the boots on. I bought a pair of Fairfax second hand on eBay a few years ago when it wasn’t being manufactured and the owner had done the just that and it looks seamless. Just makes slipping into these much easier. I’ve had them 3 weeks and so far am very pleased. They were a little snug at first but are forming nicely to my foot. At first I wished I had ordered a half size larger but now think they would have been to big. These are very comfortable to walk in. 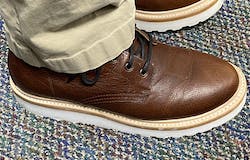 I held off on getting a pair of these for a couple years due to the cost. I finally pulled the trigger and wish I would have done it years ago. These are by far the best boots I have ever owned. They are comfortable, stylish, and built to last. I will definitely order again. A nice wide fit comfortable and easy to wear- I use them for work but if I didn’t rough them up so much I would wear them out on the town - Weeks later still smell of rich leather too! I was skeptical. I had a pair of Fairfax that always seemed tight but were what I thought was my normal size. I saw these and was curious because I've had wedge sole boots before, usually a Moc toe, and always liked the comfort of them. I made sure to order a 1/2 size over what I ordered in the Fairfax.
I am completely blown away at how comfortable these boots are. I don't normally like to do reviews, but someone needs to hear this.
If you've worn Redwings, go a full size up for these.

Wow, what an excellent product. Great craftsmanship, quality materials. Judge great lace up boots by their laces. Quality boots have quality laces. These laces are top shelf. Great fit and crazy comfortable. On my feet everyday on a horse farm and as a weapons instructor. My go to footwear for work, play or on the town. Only have 1 regret. Should have bought them sooner. Great job Wilcox, won’t be my last pair.

Being a contractor over the years I’ve owned several boots by different companies. By far, Wilcox is the most comfortable boots outs there straight out of the box. Big fan of the Kern…love the new color combos.

These boots are leaps and bounds better than any other boot in their class that I have owned. Better than Redwing, Lucchese, Georgia, Samuel Hubbard, etc. All day comfort. I use them for casual dress, hiking, and work boot. I do not know how durable they are as I have only had them for a short time.

I ordered the Shiloh in black. Wore them all day and my feet were still comfortable. I will go with a size 11.5 on my next order. As a 12 was a bit too much room. I wear them all of the time. Great quality and they are definitely durable. Well worth it. I can't wait to place my 2nd order. Go get some!

Ordered this belt with my boots to take advantage of the discount. Not disappointed at all! Excellent belt, soft supple leather feels like it’s going to last a long time…which is what you purchase a leather belt for, durability! Will
Purchase another one on a different color Purchased these boots for casual wear. They are as advertised…light and comfortable. So far the construction of the boot has held up well. Looking to pick up another pair soon

Ordered the FairFax, boots arrived quickly. Opened the box to the sweet smell of new leather. Inspected the boots and they are perfect. Craftsmanship is second to none. These are the best looking boots. The website pictures are ok, but they look great in person. Will not hesitate to order again from Wilcox

Outstanding quality! Took about a day or two to break in, but very comfortable after that. Solid and attractive.. suitable footwear for multiple dress codes… also perfect for the motorcycle. Definitely a great price for the quality that you get.

Shiloh
4 stars only because I couldn't get them in all black.

Needed all black for work. Unable to get them in all black but was told the middle was stainable. Ordered the black leather with black sole and tan middle. They arrived promptly. Out of the box, these boots were a little difficult to get on because I have a high instep, so this is a problem I have with most boots. It gets easier each time. Now, once I get these heaven- sent gifts from God on my feet.... Holy cow, literally can (and do) wear them all day. I don't work a normal 8 hour day, so I end up wearing these boots 14-18 hours at a time with no problem at all. I own quite a few pairs of boots, both for work and non- work activities and if these aren't the most comfortable pair of boots that I own, it would be because I also own a pair of the Wilcox Shiloh....

Wore these to a trip to Scotland/Ireland. Comfortable all day. Lots of walking. Great boot.